Coffee bean types and varieties: the difference between Arabica and Robusta coffee is likely to be invariably the same: “Arabica is of better quality than Robusta”. But if you ask why, it’s a different matter. So what explains the difference in aromatic quality between the two?

Coffee is one of the most widely consumed beverages in the world. It is grown in more than 70 countries, the main coffee-producing countries are Brazil (50 million 60-kilo bags per year), Vietnam, Colombia, and Ethiopia.

The Coffee tree grows in tropical regions. It is produced three to four years after planting and can live for several decades. The fruits – called cherries because of their red color – ripen six to eight months after the Arabica flowers, and nine to eleven months after the Robusta flowers.

Following the harvest, the coffee is spread out on drying areas and raked regularly. The beans are then mechanically peeled before being bagged and sent to the four corners of the world.

With no less than 800 complex and volatile aromas, Arabica is the king of coffee and accounts for 70% of the world’s coffee production. And it is an undivided king: its coffee tree is the only one to be self-pollinating; moreover, it has 44 chromosomes instead of the usual 22 for other varieties.

The robusta variety only appeared at the beginning of the 19th century in Zaire. It is, as its name suggests, particularly resistant to disease. Its beans contain twice as much caffeine as Arabica, but its flavors are a little less fine – however, being richer in coffee oil, it is indispensable for the preparation of a good espresso because it is this that gives it its characteristic froth.

At the end of a journey, taste the pointed Bourbon (known as “Café Leroy”) from Reunion Island, a weakly caffeinated coffee with a very fine taste; Kenya AA, renowned for its tangy flavor; or the Hawaiian Kona, the Mexican Maragogype (particularly fragrant), the Peaberry grown on the slopes of Mount Kilimanjaro?

Lovers of exceptional coffees will love the great Ethiopian mochas (with a very fruity taste), the Blue Mountain from Jamaica or the Sundried from Australia, beans with exceptional qualities, cultivated as carefully as the rarest grape varieties!

Both sweet and fruity, Café Privilège Bahia is an Arabica of pure origin grown in the Salvador de Bahia region of Brazil, where the hot and humid tropical climate favors the development of the beans. Harvested from Rainforest Alliance Certified farms, it is a coffee that is as aromatic as it is sustainable.

This Yemeni coffee shop is named after the oldest coffee export port. It is a noble coffee, with a wild taste, not to be confused with the coffee/cocoa blend sometimes also called mocha. It gave its name to the mocha spoon…

The difference between coffee beans arabica and robusta

Robusta, discovered at the end of the 19th century in Congo, has half as many chromosomes as Arabica (22 vs 44). It grows at rather low altitudes (0 to 700m), withstands high temperatures (24 to 30 degrees), and is resistant to disease. Being easier and cheaper to produce, robusta has always had great commercial potential.

Robusta generally has a full-bodied taste and bitter notes, in the wrong sense of the word: wood, rubber, leather, etc. Long used for espresso in Italy, a large part of the robusta produced in the world is destined for soluble coffee. A market in which price is generally much more important than taste.

Thus, due to its genetic composition and the environment in which it evolves, robusta is far from the quality and aromatic complexity that arabica can offer, even if this last sentence remains to be qualified.

Arabica coffee has twice the chromosomal structure of robusta (44 vs 22) and requires greater care due to more delicate growing conditions: Arabica grows at high altitudes (600 to 2400m) and needs temperatures between 15 and 24 degrees to flourish. As a result, the meteorological conditions linked to this environment make it a more delicate species to cultivate and more susceptible to disease.

But it is also these growing conditions that allow the grains to develop complex flavors and an acidity that goes hand in hand with the altitude of the farms.

How many coffee bean types and varieties are there

All varieties were exchanged and planted in different parts of the world. Some varieties have adapted and transformed themselves naturally, to become varieties in their own right.

Descendant of Typica on the island of Java in Indonesia. Mainly produced in Asia.

Natural hybrid of Bourbon and Typica, originating from the “New World”. Has a high resistance to diseases and a good yield per plant.

Bourbon mutation. Requires more attention and care, but has a wide range of aromas.

Cross between Caturra and Mondo Novo, developed in the 1940s in Brazil to be more resistant. Its fruits are well attached to the branches, so it is suitable for windy and rainy climates. It is available in yellow Catuai and red Catuai.

Developed in the ’50s in El Salvador, it is a cross between the Pacas variety and the Maragogype, which remains a Central American variety.

Originally from Brazil, this descendant of Typica takes its name from the village of Maragogype where this variety was discovered. It is distinguished by its abnormally large size, and is nicknamed “elephant bean”.

Known for its sweetness in aroma and caffeine, this variety is too often sold under its name “Maragogype” without any indication of origin, confusing the mind of the consumer. It is harvested in Mexico, but also in many other Central American countries.

Natural mutation of Bourbon that appeared in 1949 in El Salvador. The tree has better wind resistance.

These varieties with a romantic name and evocative of long walks by the ocean are certainly among the largest known varieties. SL is the acronym of Scott Laboratories which, in the 1930s, developed varieties specific to the Kenya terroir by creating mutations of known varieties.

SL 28 is mainly derived from Mokka, while SL 34 is derived from Bourbon via the French Mission. 90% of the varieties produced in Kenya are “SL”. For only a few years now, a few farmers in Malawi but also in America have been trying to plant these varieties on their land.

The variety of the years 2010! Discovered in the 1930s in Ethiopia, this variety was exported to Panama in the 1960s. It was only rediscovered very recently on an old Panamanian plantation. By winning major competitions, this variety has attracted the attention of a few growers who have ventured to introduce it on their plantations, such as the Colombians of La Granja Esperanza.

More difficult and fragile with a low yield, it requires more work, but its rendering is divine. Still very expensive to produce and therefore to sell, it is rarely found and at daring prices!

The properties of coffee beans medical | your health

The Bioactive compounds in the coffee beans

Coffee contains more than a dozen bioactive compounds, most of which are formed during the roasting (roasting) process of the bean. Three of them are found in high concentrations and are important from a physiological point of view. These are caffeine, diterpene alcohols, and phenolic compounds known for their antioxidant effects.

Caffeine. This compound is by far the best-characterized compound so far in coffee. In the United States, it is estimated that 75% of the caffeine consumed comes from coffee. In Canada, this amount has been estimated at 60%. The rest comes from tea, chocolate, energy drinks, etc.

The caffeine content of coffee varies according to the type of beans, the roasting method, and the method of preparation (for more details, see our Caffeine fact sheet). Caffeine is known mainly for its stimulating effects4. 4 In healthy adults, a small amount can increase alertness and concentration.

In other people, however, it can cause undesirable biological effects such as insomnia, headaches, irritability, and nervousness. According to Health Canada, in adults, caffeine consumed in moderation (three cups of coffee per day) does not cause adverse effects on behavior (anxiety, attention span), cardiovascular health, or cancer.

A study has shown that the antioxidant capacity of plasma increases significantly following the ingestion of a single cup of filter coffee (200 ml). This suggests that coffee probably exerts its preventive effect on certain diseases through its antioxidant power5. Among the antioxidant compounds in coffee are phenolic compounds, including certain volatile substances produced during roasting. These volatile substances are attributed to the characteristic smell of coffee.

10 In comparison, blueberries, cherries, plums, apples, and kiwis, which are the fruits richest in phenolic acids in the same family as coffee, contain from 10 mg to 230 mg per 100 g to 200 g serving. Several researchers believe that caffeine and chlorogenic acids are largely responsible for the antioxidant effect of coffee. 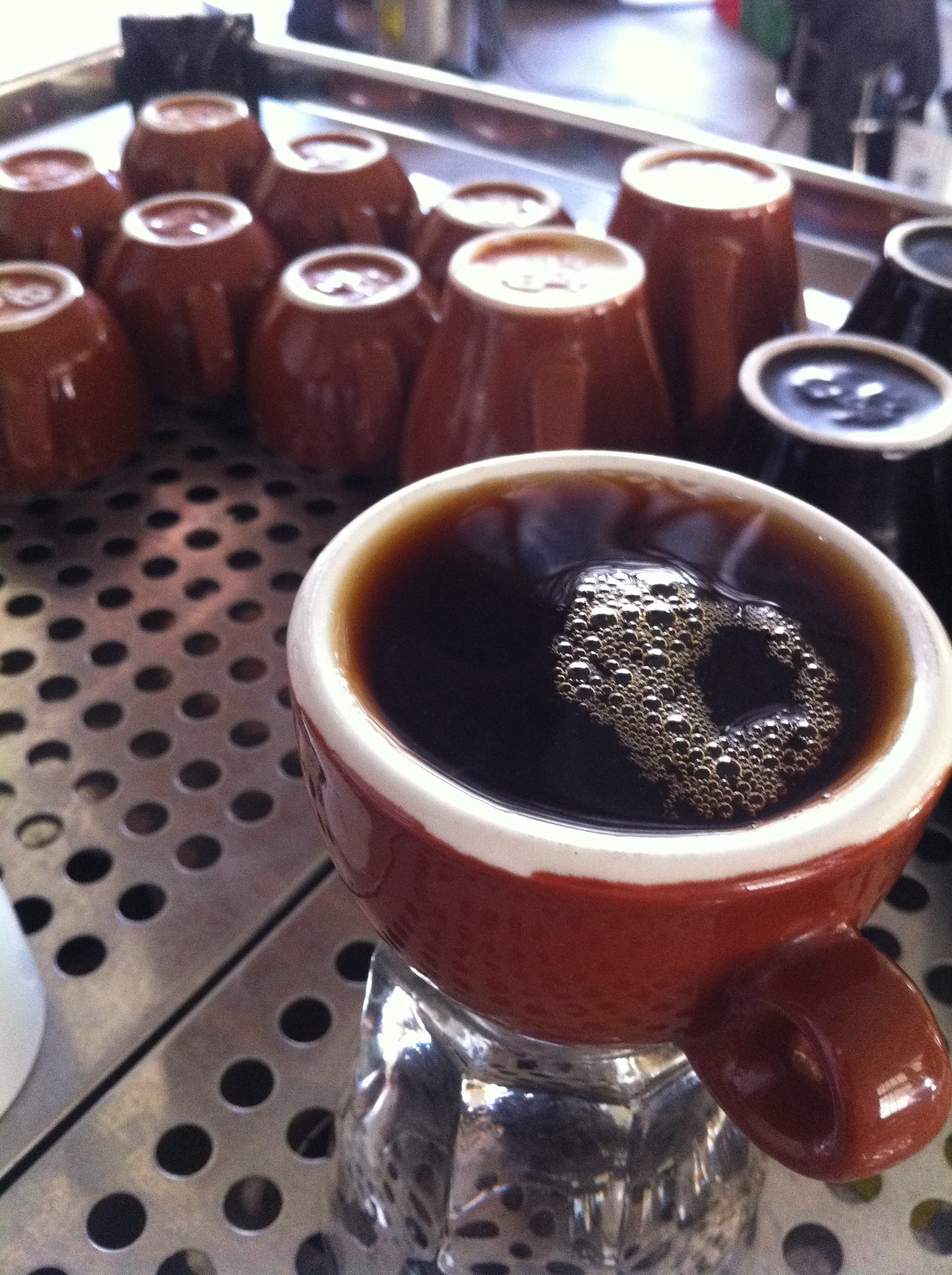 How to make coffee with beans?

When you grind your coffee beans with a mortar and pestle, you must be careful not to crush them into unfilterable dust. You will need about two tablespoons of grind per cup you want to brew. Use the pestle to crush them against the bottom of the mortar.

What is the difference between Arabica and Robusta coffee?

Yes, Robusta has a stronger, bitterer and more powerful taste, but it is not very aromatic. Arabica coffee is sweeter, less full-bodied, with a great aromatic finesse in the mouth. Sometimes we find a Robusta coffee supplemented with a little Arabica to reduce its bitterness, this is called a blend.

How to recognize quality coffee beans?

Its appearance: coffee beans must be oval and regular, with a uniform color. Beware in particular of breakage and color variations. Finally, whether ground or beans, the coffee must be dry. If it looks oily, it indicates that it has been badly stored.

Advertisements
Show me some love💖 by sharing this post ☕:
Tags: about coffee, Ask me, coffee culture

This is How to clean a coffee maker with vinegar. Easy 2021

The effects of caffeine on the body- simple guide 2021