10-Starbucks-secret-menu-Frappuccinos
Show me some love💖 by sharing this post ☕: 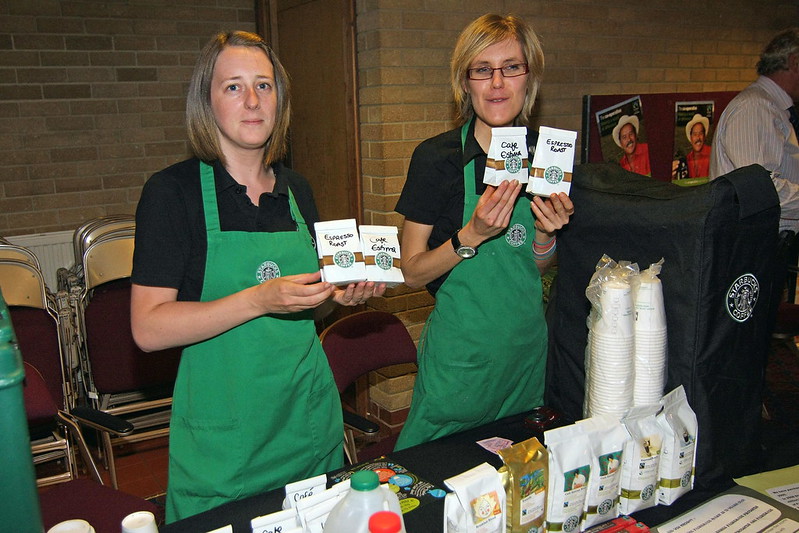 The 10 Starbucks secret menu Frappuccinos and easy to order

Tell your barista you’d like a Double Chocolate Chip Frappuccino blended with white mocha sauce in place of the regular mocha, topped with whipped cream (either chocolate or regular—your choice!).

If you prefer more crème than chocolate cookie flavor in your blended drink, order a Vanilla Bean Frappuccino with java chips blended in, and top it with mocha syrup, cookie crumbles, or both—whatever your heart desires! You’ll get an even creamier drink that’s reminiscent of cookies and cream ice cream.

This secret menu Frappuccino idea is also a great way to recreate the McDonalds Oreo Frappe (an on-menu item) at Starbucks. Since the off-menu treat has grown in popularity, bloggers have come out with their copycat recipes.

One such rendition of the Oreo Frap includes coconut milk, coconut sugar, and cocoa powder—since the drink has inspired vegan imitations, it’s clear how popular and well-loved it has become with Starbucks’ large customer base!

The iconic Cotton Candy Frap is both classically sweet and non-caffeinated, making it an excellent dessert option for kids and adults alike.

If you’re located in the US or Canada, however, and are drooling over the candy-colored drink, it’s super simple to order off-menu.

Just ask for a Vanilla Bean Frappuccino with added raspberry syrup. You’ll want one extra pump for a tall, 1.5 pumps for a grande, and two pumps for a venti.

The concoction will taste like a mouthful of candyfloss in a creamy drink. A change in the formula of Starbucks’s raspberry syrup has dulled the drink’s bright pink color, however. The raspberry syrup was originally artificially colored, but it now has a natural color due to backlash from customers who found it too artificial-looking.

Unfortunately, that means Cotton Candy fraps ordered nowadays will be white, although they’ll still taste just as good with the inclusion of raspberry syrup.

Aside from secret menu drinks, another little-known Starbucks secret is that some locations will let you blend cake pops, biscotti, and other bakery items into your drink for an extra-special customized confection.

For the Cake Batter Frap, ask for a Vanilla Bean Frappuccino with added hazelnut syrup (again, one extra pump for a tall, 1.5 for a grande, and two for a venti). Finally, ask your barista nicely to blend in a cake pop—if you’re lucky enough to get extra, it’ll take your cake batter blended drink to the next level.

Starbucks promoted a very similar Birthday Cake Frap for the 20th anniversary of the Frappuccino in 2015. The Birthday Cake Frap joined the menu for only four days and was topped with a very special pink-tinted raspberry-infused whipped cream.

According to Starbucks Secret Menu, pink whipped cream is usually only rolled out for special occasions like Valentine’s Day, so this was an exciting limited release for Starbucks aficionados. To replicate the Birthday Cake Frap, ask for a Vanilla Bean Frappuccino with added hazelnut in the same ratios as mentioned earlier.

You won’t be able to get the pink whipped cream on top, but the rich cake batter taste should more than makeup for it!

This marbled pink drink is one of the most popular on Starbucks secret menu.com, the authority on fan-made Starbucks drink recipes.

It’s also super simple to the request—just ask for a White Chocolate Mocha Frappuccino with added raspberry syrup (in the same ratio as we’ve mentioned). If you like it a little sweeter, fans recommend increasing the syrup by an extra half pump for each size—and adding whipped cream on top.

This drink has also been affected by the chain’s movement towards more natural sweeteners. Since the raspberry syrup is now colorless, the Raspberry Cheesecake Frap is now white—but fans still order it for its sweetness and convenience, pink-tinted or not.

Don’t let that stop you from getting creative at the counter, however, as long as you’re courteous. The drinks on this list all require minimal additions, so they’re less hassle for staff while allowing customers to shake up their daily coffee run.

Starbucks already has you covered in the seasonal drinks area, but if you’ve exhausted the regular holiday menu or are craving a cool peppermint drink out of season, this frap should do the trick. It also follows the same general formula as most of the other drink combos on this list. Ask for a Vanilla Bean Frappuccino with added peppermint syrup.

If you’re ordering it around the holidays, ask for a sprinkle of peppermint candies on top to make you’re creamy treat extra picture-perfect. Coffee review blog Brewed Daily reviewed the drink in 2014 when Starbucks added a limited-time $3 Candy Cane Frap promotion, making the fan-made recipe a little less secret.

The blog described it as having a great blend of vanilla and peppermint flavors. The only downside? The Candy Cane Frap contains no caffeine, so you’ll have to depend on the jolt of freshness from the mint to jumpstart your day. Fortunately, it’s equally good with an added shot of espresso.

Not feeling a Frappuccino? You can add the peppermint syrup that makes this creamy concoction fresh and cooling to any drink year-round—in fact, the peppermint white chocolate mocha is a permanent fixture on the menu.

Just ask for a half-white mocha/half regular mocha Frappuccino and add raspberry syrup (this time it’s one pump for a tall, two pumps for a grande, and three pumps for a venti).

The combination of raspberry and chocolate should more than makeup for the lack of color. This classy drink is also known as the Red Tuxedo Frappuccino.

Starbucks has a similar Red Velvet Cake Crème Frappuccino on the official menu, which is described as a “confectionery-inspired blend of chocolate chips, mocha sauce, raspberry and vanilla syrup… perfectly sweet and velvety smooth.”

The fan-made Red Velvet is simpler, but a great alternative if you’re ordering in a region that doesn’t offer the official version and looking to minimize time spent at the counter explaining your order to a frazzled barista.

To add a tasty cinnamon roll flavor to your Red Velvet Frap, just add cinnamon dolce syrup on top of the raspberry syrup (again, one pump for a tall, two pumps for a grande, and three pumps for a venti).

This creamy orange drink is a perfect alternative to the equally popular and delicious Orange Creamsicle Frappuccino for customers less keen on the orange mango juice. It’s also much simpler to order at the counter.

Just ask for a Valencia Orange Refresher blended with a Vanilla Bean Frappuccino base. Starbucks Secret Menu also offered a convenient tip for those looking to lighten their barista’s load—the drink can be abbreviated to “VOR, VBF” on the side of the cup.

The Orange Creamsicle Frap that inspired this simpler version was created by Barista Tavia H as an orange-mango rendition of the on-menu Strawberries & Cream Frappuccino.

If you’re placing an online or mobile order, feel free to try out the more complex recipe, since it won’t lead to a lineup behind you as you explain your order.

The simpler version knocks off several steps and also minimizes the sugar content of the drink, by cutting out the extra syrups required to balance the Orange Creamsicle Frap. No matter which option you choose, though, you’ll get a delightfully creamy and citrusy summer treat!

The basic Mango Frappuccino recipe is super sweet as well as super simple.

It’s a fan favorite on Starbucks Secret Menu and deserves a spot in your summer drink arsenal. To order one, just ask for a Vanilla Bean Frappuccino made with one less scoop of vanilla bean powder and added mango syrup (three pumps for a tall, four for a grande, and five for a venti).

Like the Red Velvet Frap, the Mango Frap has an on-menu counterpart—the Mango Pineapple Frappuccino Blended Creme. Starbucks’ website describes the drink as a taste of the tropics. Nevertheless, the Mango Frap is a good option for the pineapple-averse and those looking for a simple customized drink with a clear, uncomplicated flavor.

The Mango Pineapple Frap also offers a slightly different marbled look because of the layers of orange-hued mango pineapple sauce mixed in with the creme base. A pure mango Frappuccino has been released in Singapore, however. The Mango Mango Frappuccino rolled out in 2018, incorporating honey and citrus notes of Alphonso Mango into a blend of mango jelly, mango juice, and milk.

This nostalgic, uncaffeinated drink is another lovely summer option that’s not overly sweet—though it does draw inspiration from the popular candy.

To replicate the bubblegum flavor stateside, just ask for a Strawberries and Creme Frappuccino with no classic syrup (unless you like it sweeter) and added raspberry syrup (one pump for a tall, two pumps for a grande, and three pumps for a venti).

You can thank Barista Jennifer V of Plant City, Florida for this nostalgic treat. So Yummy wrote of the two candy-themed releases that they were “made for your Instagram… but they’re a bit much, no?” They went on to characterize the candy-inspired flavor as ‘adorable’—and it’s satisfying both nostalgic adults and kids.

The chain’s movement toward sweeter, candy-inspired drinks epitomizes what people love about the famous Frappuccinos—they’re a socially acceptable way for adults to get their milkshake fix, while also giving kids and tweens a sweet introduction to the coffee chain.

Just order a White Chocolate Mocha Frappuccino as usual, with added java chips. Ask for it topped with even more java chips in the whipped cream to complete the Dalmatian effect, and optionally, add some vanilla or hazelnut syrup for extra sweetness.

The White Chocolate Mocha Frappuccino automatically contains caffeine, so the Chocolate Dalmatian Frap is a perfect blend of frozen treat and actual caffeine delivery system—you won’t need to double up with an actual coffee to get your caffeine fix from this tasty treat. This likely contributes to its popularity with coffee-loving customers who also enjoy customized drinks.

Best of all, the addition of java chips likely won’t cost you as much as some secret menu drinks with more significant modifications. You can also apply the Chocolate Dalmatian formula to a regular hot or iced white chocolate mocha as well for a chocolate-spotted version of the white mocha drink in all its forms.

The Chocolate Dalmatian Mocha is one of Starbucks’ most popular secret menu items, and it’s easy to see why, since the simple modification is both creative and novel without sacrificing caffeine content.

Show me some love💖 by sharing this post ☕:
Tags: coffee fans, starbucks

Coffee ratios. how much 1 per cup | 2 weight. ultimate guide